“The anger of the Lord burned against them, and he left them. When the cloud lifted from above the tent, Miriam’s skin was leprous — it became as white as snow”
(Numbers 12: 9-10 NIV).

Recently, I was excited to score coveted tickets to the National Museum of African American History & Culture in Washington, DC—nicknamed “the Blacksonian." My initial excitement about visiting, however, soon turned into despondency—and even nausea—as I scanned 600 years of brutal displacement, cruel enslavement, and incessant racism. As one who’s not black, it crushed upon me like a reality overload—leaving me ashamed and doubting that I could ever endure such oppression myself.

A few weeks later I saw Spike Lee’s movie BlacKkKlansman, the true story of a black undercover detective who infiltrated the Klu Klux Klan. Beyond its retro 70s comedy and nostalgia, the film stirred similar feelings of revulsion and grief in me.

I work at a nonprofit agency that helps children traumatized by abuse, neglect, and violence, so I know what vicarious or secondhand trauma feels like. Indeed, that’s the kind of physical anguish I experienced at both the museum and the theater.

Still, I know that my own limited experience only mirrors a fraction of the suffering that victims of abuse and racism repeatedly experience. Moreover, I’m utterly humbled by the resolution and resilience required to survive amid such horrible circumstances that I can only begin to imagine.

What disturbed me most, however, while visiting the Blacksonian museum and watching BlackKklansman were the portraits of Christians owning slaves and belonging to the KKK while burning crosses and justifying their conscience by quoting Scripture. Tragically, American history attests that too often Christianity promoted and sustained racism through the brutal colonialism of missionaries and the enforced segregation of its churches.

Of course, racism is in direct opposition to the true gospel of Jesus that demonstrates a radical ethic of loving your neighbor as yourself.1 Yet, our sin nature still prevails.

The word sin originates from the archery term syn that refers to missing the mark or gold center of the target. Therefore, I’m calling racism sin straight-up here, because it most definitely misses the mark of God’s great commandment of unconditional love (John 13:34).

In a startling example, from the Old Testament book of Numbers, God revealed how deeply racism angers Him, when Miriam and Aaron spoke against Moses for marrying a Cushite woman.


“Miriam and Aaron began to talk against Moses because of his Cushite wife, for he had married a Cushite” (Numbers 12:1 NIV).

In Biblical times, Cush was synonymous with blackness. Miriam, Moses’ sister, criticized her brother for choosing Zipporah, an Ethiopian, rather than a ‘more suitable’ wife from their own tribe. Miriam and Aaron even started to question the validity of Moses’ authority to lead them, since he had chosen a Cush.

God, however, vindicated Moses and punished Miriam by giving her a skin disease that turned her skin as “white as snow.”


The anger of the Lord burned against them, and he left them. When the cloud lifted from above the tent, Miriam’s skin was leprous — it became as white as snow. Aaron turned toward her and saw that she had a defiling skin disease (Numbers 12:9-10). 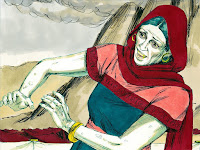 It’s as if God was rebuking Miriam with a sarcastic sense of humor: "So, you don’t like black skin and think white skin is better? Well then, I’ll make your skin perfectly white, white as snow! Now, you can see what it feels like to be scorned for your skin."


In the previous chapter, God punished the Israelites for complaining about only having manna and not having any meat, so God surrounded their camp for miles with quails piled up about three feet high. God intended to give them so much meat that they’d become sick of it (Numbers 11).

Likewise, God punished Miriam’s prejudice for white over black skin color by turning her skin so white that she was disgraced as a leper and ostracized from their camp for seven days (Numbers 12:11-16).

Wow! God throws some mean shade. Be careful what you gripe about.

God's abhorrence for Miriam’s sin of racism became physically graphic for everyone to see: the black woman’s skin was fine in His sight, but the ultra-white woman’s skin brought disgrace! Thus, God shows no partiality to skin color, and in fact, punished a famous biblical character who did.

After looking at the condition of his sister, Aaron begged Moses, “Please, sir, do not make us suffer this punishment for our foolish sin. (Numbers 12:11 GNT).

Then Moses interceded for their sister; and after seven days, Miriam was permitted to return to the camp, so the Israelites could move on.

At a time when politicians and extremists are stoking racial hatred and ethnic fears, we would do well to heed God’s biblical warning.

The continued political approval by evangelicals for the current President and his policies demonstrates a disconcerting complicity toward a covert racist agenda. We have witnessed this president continually disrespect and invalidate black people by:
Clearly, this racism must somehow resonate with his supporters or they would not tolerate it. Sadly, a large segment of American Christianity continues to sustain a white supremacist agenda.

Indeed, it’s hard to swim in a polluted stream and not be contaminated by the water. We’re all the product of a racist history and attitudes just as much as we’re all sinners. As Christians, however, we’re called to confess and renounce both.

Too often Christians hide their racism by saying that it doesn’t exist, or that it would go away if we’d just quit talking about it. They may even claim that they don’t see skin color, as if there was something shameful about it.

Denying racism is like saying that you can’t see termites, so they don’t exist. Or thinking termites will disappear by themselves. In fact, the failure to name racism enables it to infiltrate our nation, our church, and our hearts just as termites can infest and damage our homes if ignored.

Racism is a demonic spiritual force that enlarges itself by hiding in silence and darkness.

As Christians, we’re accountable to God and not to political leaders. Instead of hiding or even justifying our sin of racism, we need to confess and renounce it.

How then, might we respond when explicit racism permeates the news?
For example:

>How do we as Christians justify police routinely shooting unarmed black men?

>How do we as Christians explain the resurgence of the KKK – a once clandestine society – marching visibly now in broad daylight?

>How do we as Christians rationalize 1400 people of color dying after our government abandoned them in the aftermath of Hurricane Maria in Puerto Rico?

>How do we as Christians tolerate ICE separating toddlers from their parents and impounding them into tender age detention centers?

>How do we as Christians sanction impeding clean water to Native Americans living in reservations on their very own homeland?

These atrocities must be repudiated—and yes, confessed by those of us who claim to follow Jesus.

Racism is a sin rooted in our history of black slavery and genocide of indigenous people. It’s embedded itself in the institutions and structures of our social and political life, thereby, establishing a collective form of injustice and racial inequality.

As one civil rights leader explained: “When white terrorists bomb a black church and kill five black children, that is an act of individual racism, widely deplored by most segments of the society. But when in that same city – Birmingham, Alabama – five hundred black babies die each year because of the lack of power, food, shelter and medical facilities, and thousands more are destroyed and maimed physically, emotionally and intellectually because of conditions of poverty and discrimination in the black community, that is a function of institutional racism…"2

People of color frequently experience inequality in our education, housing, employment, banking, judicial, prison, voting, and health care systems. That’s why affirmative actions and policies are necessary to thwart the devastating consequences of such systemic racism.

However, God requires even more from His people than mere dependency on government.


“If you really fulfill the royal law according to the Scripture, ‘You shall love your neighbor as yourself,’ you are doing well. But if you show partiality, you are committing sin and are convicted by the law as transgressors (James 2:8-9 ESV).

In kingdom reality, racism has secured a satanic spiritual stronghold over our nation. It becomes idolatry when it exalts what was created, namely race, above the Creator for saving power (Romans 1:21-25). Ironically, diabolic powers conjure destruction as enmity and hate remain unchecked.

Therefore, it’s imperative for the church to utilize its spiritual authority in praying together against the power and principality of racism that’s working in our nation and within the church.

Only God’s mercy can heal our country and bring reconciliation between races. Mercy begins through our own personal confession and repentance. As a community of believers, we must also acknowledge the sin of racism and denounce its idolatry. Such repentance will then enable us to see each other as Jesus does so that we can overcome racism together.

If My people who are called by My name will humble themselves, and pray and seek My face, and turn from their wicked ways, then I will hear from heaven, and will forgive their sin and heal their land (2 Chronicles 7:14). 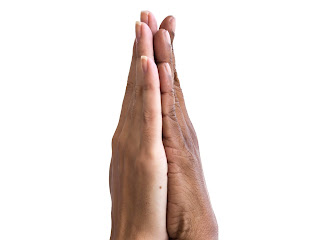 Will you pray with me?