"But they did not believe the women, because their words seemed to them like nonsense" (Luke 4:11 NIV).

It’s been a very difficult and tearful time for survivors of sexual assault, triggered by the gripping testimony from Dr. Christine Blasey Ford before the Senate Judiciary committee. Suppressed memories of sexual trauma resurfaced as viewers across the nation painfully identified with her story:

"…I was pushed onto the bed and (he) got on top of me. He began running his hands over my body and grinding his hips into me. I yelled, hoping someone downstairs might hear me, and tried to get away from him, but his weight was heavy. (He) groped me and tried to take off my clothes. He had a hard time because he was so drunk, and because I was wearing a one-piece bathing suit under my clothes. I believed he was going to rape me. I tried to yell for help. When I did, (he) put his hand over my mouth to stop me from screaming. This was what terrified me the most, and has had the most lasting impact on my life …”1

Following her account, the National Sexual Assault Hotline reported its busiest day in history as a dark veil of shame and secrecy lifted for many victims when Ford gave her testimony.2

Since the advent of #MeToo, an alarming 51% of women have reported being touched or groped inappropriately.3  And yet, even as women speak out, our voices continue to be ignored or silenced as the regime of patriarchy scandalously persists.

Patriarchy has been defined as a “social system in which males hold primary power and predominate in roles of political leadership, moral authority, social privilege and control of property.” 4

In the Bible, patriarchy stems directly from the Fall of humankind, when God declared to Eve “and he will rule over you” (Genesis 3:16). That’s why patriarchy infuses the social, legal, and religious systems that Jesus came to liberate us from. Since our very genesis, patriarchy is sin. It separates us from God and one another as male and female, whom God created to rule the earth together (Genesis 1:26-28).

In her provocative book, Malestrom: Manhood Swept into the Currents of a Changing World, Carolyn Custis James illustrates how Jesus deliberately uses patriarchy to distinguish His Kingdom from the kingdoms of the world:

Patriarchy matters because it is the best cultural backdrop to teach us the Bible’s message. Again, it is not the Bible’s message, but a teaching tool God has chosen to open our eyes to the “not of this world” nature of the kingdom of heaven of which we are citizens.5


In the Roman and Judaic world, women were considered second-class citizens, but Jesus repeatedly confirmed their intrinsic value as equal to men. Women occupied significant roles during Christ’s ministry, crucifixion, and resurrection serving as disciples, benefactors, and eyewitnesses. As teachers, prophets, and missionaries, women later evangelized the Resurrection message in the early Christian movement--until their voices became suppressed by institutionalized, hierarchical religion.

This radical inclusiveness of Jesus has never been recognized by the legalism that even today suppresses the very essence of the Good News.

In fact, the Apostle Paul proclaimed that in the kingdom of God "there is neither male nor female, for all are one in Christ Jesus" (Galatians 2:28).

In these critical times when judicial, political, and monetary power emerge as a covetous driving force for some, it’s imperative to remember the Kingdom that defines us as followers of Christ.


Jesus Heals the Bent-over Woman
The powerful Bible story of a crippled and marginalized woman exemplifies this direct clash between the Kingdom of God and the kingdom of this world. 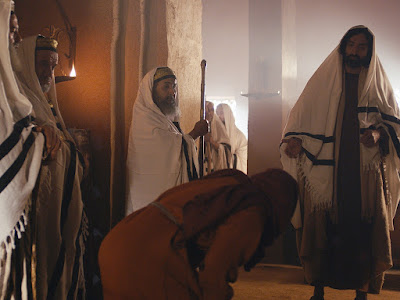 "Jesus was teaching in one of the synagogues on a Sabbath," which represents here the legalistic religious system of his day (Luke 13:10-17). This weekly celebration in a prominent meeting place provided the Pharisees an opportunity to flaunt their holier-than-thou pride in keeping the Law. As was the custom in every first-century synagogue, the men sat in front while the women remained segregated in the back.

During his teaching, Jesus sighted a particular woman concealed low behind the vast crowd. She was bent-over and couldn't straighten herself up. Looking down at the ground, this woman had somehow found her way through the streets all the way to the synagogue to hear Jesus speak. She had survived and persevered for 18 years—slumped, bent, hunched over, and in that sense, pushed down.

She may have been able to walk upright before her affliction, but something – "a spirit" – had crippled her. It could have been via an illness, an injury, chronic abuse, or even a violent assault. We don't know.

In Hebrew, the word for LIFE (chai) is also the number eighteen, which signifies life, worship, and being freed. Someone “bent-over” with an infirmity is figuratively the opposite of someone “upright.” Therefore, this story is meant to portray a deeper spiritual meaning than just an isolated incident.

Indeed, this unnamed woman bears the name of every woman who’s been pushed down by oppression, affliction, bondage, or maltreatment, yet still seeks mercy, hope, and deliverance.

She’s Christine Blasey Ford—overpowered, pushed and weighed down struggling to find her voice, but literally muffled by the hand of power. And yet, she persisted; she spoke out; she inspired!

Very likely the multitude of Jesus' followers were present in the synagogue when he taught on that holy day, anticipating his preaching. Yet, Jesus focused their attention not on a sermon but on this disabled and disempowered woman. He could have waited until after the service and talked to her privately. But  SHE was his teaching that day.

In fact, he called her upfront where women were otherwise forbidden. We can imagine the gasp of astonishment as the congregation watched.

“Woman you are set free.”

"Then he put his hands on her, and immediately she straightened up and praised God" (v. 12-13).


“The Spirit of the Lord is on me, because he has anointed me to proclaim good news to the poor. He has sent me to proclaim freedom for the prisoners and recovery of sight for the blind, to set the oppressed free, to proclaim the year of the Lord’s favor” (Luke 4:18).

The "synagogue leader," however, became "indignant" at Jesus' disregard for their traditional order (v. 14)

HOW DARE YOU? THIS CAN'T HAPPEN HERE! NOT TODAY OF ALL DAYS. WE'VE GOT OUR OWN AGENDA.

WHY DIDN'T SHE COME FORWARD SOONER? THIS IS JUST A POLITICAL HIT. A SHAM! A DISGRACE! THIS IS HELL!

Jesus, however, declared his true righteousness by calling those pretentious leaders “hypocrites" who, when it benefits their own selfish interests, don’t hesitate to break the law (v. 16-17).

Jesus used his power to uplift people – the sick, the poor, the hungry, the foreigner, the disenfranchised. Unlike the religious leaders, Jesus demonstrates God's heart for His children. He doesn’t need a day to make himself appear holy.

The religious leaders condemned Jesus for violating the Sabbath Law, but in fact, Jesus is God's Sabbath. All who are broken find rest in him (see Ezekiel 20:12; Hebrews 4:9-10).

We can rest knowing that Jesus our Savior empowers us to overcome the oppressive systems that infest this broken world.

Throughout the Gospels, we meet many women who found freedom, healing, and purpose as followers of Jesus. In spite of the patriarchal custom of suppressing women, they stayed with him throughout his crucifixion and resurrection: Mary Magdalene, Salome, Joanna, Susanna, Martha, Mary, and others.

However, this bound woman is not given a name, but was known only by her affliction and limitation. But Jesus recognized her as having much more value than that. By referring to her as "a daughter of Abraham," he acknowledged her intrinsic value and worth as a cherished member of God's family.

Jesus called upfront this nameless, otherwise hidden woman, to demonstrate for all God's people that he sees us when we're down and discouraged. He knows us. He cares. He saves.

God still acts in our behalf to overcome the disrespect, restriction, harassment, and abuse that keep us bound as women.

The woman who heard Jesus calling her, who stood up at last before the disapproving guardians of tradition lives today in the hearts of every woman who longs to be free.

She's every woman who feels pushed-down, silenced, oppressed, intimidated, and unable to find her voice.

She's every woman who refuses to succumb to the unyielding systems of this world, but instead, perseveres after her identity and freedom in Christ.

She's every woman who nevertheless, persists. 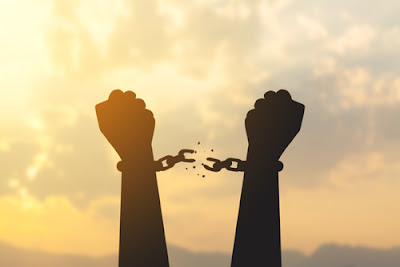 10 On a Sabbath Jesus was teaching in one of the synagogues, 11 and a woman was there who had been crippled by a spirit for eighteen years. She was bent over and could not straighten up at all. 12 When Jesus saw her, he called her forward and said to her, “Woman, you are set free from your infirmity.” 13 Then he put his hands on her, and immediately she straightened up and praised God.
14 Indignant because Jesus had healed on the Sabbath, the synagogue leader said to the people, “There are six days for work. So come and be healed on those days, not on the Sabbath.”

15 The Lord answered him, “You hypocrites! Doesn’t each of you on the Sabbath untie your ox or donkey from the stall and lead it out to give it water? 16 Then should not this woman, a daughter of Abraham, whom Satan has kept bound for eighteen long years, be set free on the Sabbath day from what bound her?”

17 When he said this, all his opponents were humiliated, but the people were delighted with all the wonderful things he was doing.