Jesus said, "Let the little children come to me, and do not hinder them, for the kingdom of heaven belongs to such as these” (Matthew 19:4).


Historically, children were considered the property of their families – typically headed and ruled by fathers. Consequently, parents could mistreat, neglect, and abuse their children, because patriarchal society didn’t acknowledge children as having any worth nor rights. Kids were "to be seen but not heard."

Accordingly, when the little children were brought to Jesus, his apostles shoved them out of the way. Imagine how they might have scolded them:


When Jesus saw this, he was outraged. He said to them, “Let the little children come to me, and do not hinder them, for the kingdom of God belongs to such as these. Truly I tell you, anyone who will not receive the kingdom of God like a little child will never enter it.” And he took the children in his arms, placed his hands on them and blessed them (Mark 10:13-16 NIV).

Regardless of how society may value or how parents may treat children, Jesus demonstrates clearly that children are of primary importance to him. Jesus values children, because they’re his children. That’s right, children belong to God – not to their parents nor to society.

Think about that, because that changes everything!

The miracle of life belongs to God; therefore, the Creator has the rights to the created.

“But now, this is what the Lord says, He who created you, Jacob, He who formed you, Israel: ‘Do not fear, for I have redeemed you; I have summoned you by name; you are mine” (Isiah 43:1).

Children are formed by God; they belong to Him. Since children belong to God then we don’t have the right to control them nor to mistreat them.

Instead, Jesus demonstrates how we’re to treat children by taking a child into his own arms and blessing it.


That’s also what Jesus expects us to do – to welcome, embrace and bless his children.

Moreover, Jesus commands that we do not “hinder” his children.

According to The Macmillan Dictionary online, to hinder means: to stop someone from making progress or developing.1

Numerous studies on the effects of Adverse Childhood Experiences (ACES) document the connection between the stress of childhood adversity and negative physical and mental health outcomes in adulthood. Stress and/or trauma experienced in early childhood can lead to a variety of problems in later life including both physically and mentally.2

Mistreating children hinders their ability to develop into emotionally and physically healthy adults. As a pediatric nurse and professional psychologist who has worked with abused and neglected children, I've witnessed this first hand.

But Jesus doesn’t just stop there. He goes on to warn us of the judgment in store for us if we harm his children:

Whoa! Those are some of the harshest words Jesus ever uses. Listen up! Jesus means business when he speaks in hyperbole like this. Don’t mess with his children or else! They’re treasured by God, because they reflect Him to the world.


“See that you do not despise one of these little ones. For I tell you that in heaven their angels always see the face of my Father who is in heaven" (Matthew 18:10).

How special is that? Don’t you wish you could always see God’s face? 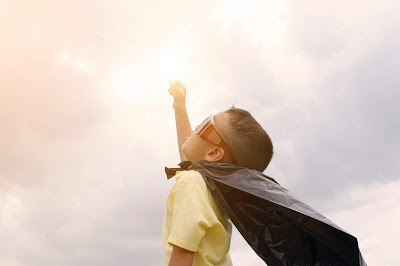 Well, you better get in touch with your own inner child and reconnect with your feelings from childhood, or you’re not even going to enter his kingdom at all -- he says!  He repeated that twice just in case you missed it the first time.

Let’s be clear. The “kingdom” is a big deal to Jesus, because he mentions it at least 106 times in the gospels (NIV version).

Simply stated: the kingdom signifies the reign or rule of God as King.

Significantly here, Jesus declares that the kingdom of God belongs to children. He’s not only making a comparison; he’s stating a fact about ownership.

Unlike the other hypothetical stories that Jesus often told to illustrate a point, Jesus actually brings children up close to himself to demonstrate their significance to him. The presence of these children distinguishes these incidents from other parables where he merely uses the word “like” to make a hypothetical comparison. Jesus must definitely have something essential to say about children.

Jesus uses a child to illustrate what must be done to enter his Father’s kingdom and enjoy His rule in your life: you must become like children. You must embrace your own childlike heart to empathize a child’s point of view, or you’ll never enter God’s kingdom. That’s right! You better squat down to a child’s eye level and view the world from a child’s eyes or you might completely miss what Jesus is talking about in all the Gospels. For starters, their "low-level" view makes you feel very small, even humble! 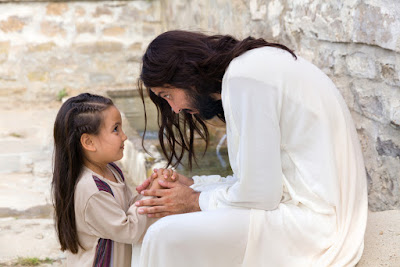 Why is this so difficult for us adults to do?

Most likely it’s because you were hurt in some emotional or physical way in your own childhood, and it now feels too vulnerable “to become like little children” again. However, Father God longs to heal that, too, if you will only trust Him and once again become vulnerable to Him like a child.

Moreover, Jesus further explains that whoever welcomes a little child welcomes him as well (Matthew 18:5), and whatever you do for the least valued you also do to him (Matthew 25:40). That’s why “greatness” in God’s kingdom is measured by how you treat the least and the marginalized in society.

And yet, children are too often ignored, shamed and punished. They’re often discounted and considered less important than adults.

Unfortunately, the significance of children to Jesus has also been dismissed or overlooked by male preachers who don’t seem to realize that Jesus was actually affirming the intrinsic value of children and not merely using them as a prop to illustrate religious themes. What he states was revolutionary! In ancient Greece and Rome, children were considered nonpersons, so it wouldn't have made sense to his followers for Jesus to merely use children as a teaching example.  Jesus' parables rely on metaphors that were familiar to their daily life. The value of children, however, was not known to them.

Nonetheless, Jesus emphatically declares the significance and worth of children, which was radical then -- as now.

How can we claim to value children when
Nelson Mandela stated: “There can be no keener revelation of a society’s soul than the way in which it treats its children.” 3

If America is to be truly “great”, we will need to amend our attitude and treatment of all God’s children.

3. Speech by President Nelson Mandela at the launch of the Nelson Mandela Children's Fund, 08 May 1995.
http://db.nelsonmandela.org/speeches/pub_view.asp?pg=item&itemid=nmS250&txtstr=mahla