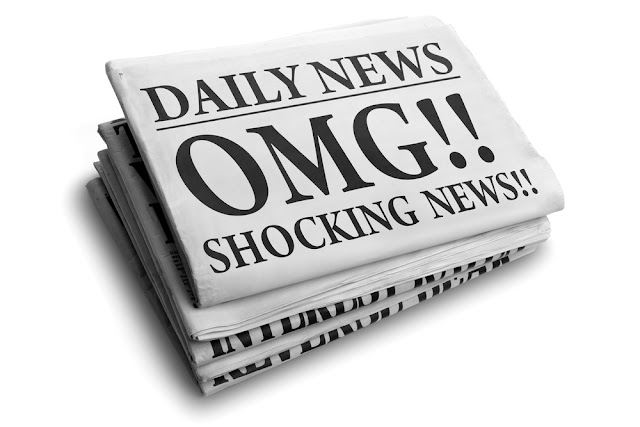 Life has become increasingly stressful for most of us. Blame it on the economy, technology, or the relentless news cycle. I don’t know about you, but I’m emotionally exhausted from the barrage of negative stories.

As a nurse, I eat right, exercise moderately, and have a pretty level head. I’ve even written about rest and burnout in the past, so I should be able to handle all this stress with self-care -- like a vacation, a glass of wine, time with my husband.

But it's really hard to deal today with so much judgment, enmity, and mean-spiritedness. I can’t bear reading any more cynical and hateful comments online. What’s going on? Are people just venting their own frustrations or has our culture shifted its core values? How do we withstand the vicarious trauma that so often overwhelms us in current events?

As I reflect and seek wisdom, I've come to believe that we suffer from a desperate need for mercy. It's helpful for me to recall President Kennedy’s Inaugural Address, which aptly described this issue almost sixty years ago:

And so, my fellow Americans: ask not what your country can do for you — ask what you can do for your country.
My fellow citizens of the world: ask not what America will do for you, but what together we can do for the freedom of man.
Finally, whether you are citizens of America or citizens of the world, ask of us the same high standards of strength and sacrifice which we ask of you. With a good conscience our only sure reward, with history the final judge of our deeds, let us go forth to lead the land we love, asking His blessing and His help, but knowing that here on earth God's work must truly be our own.
http://www.ushistory.org/documents/ask-not.htm

I suppose those words resonated with me because like me JFK was Catholic. As a child, I went to parochial school and had to memorize the Baltimore catechism, which theoretically gave the definitive answers to all of life’s questions. Although I can’t recite it anymore, it probably determined my future life choices as it instilled in me -- life JFK's challenge -- the desire to help others through “charity” and “works of mercy.” (Baltimore Catechism#174).
https://www.catholicity.com/baltimore-catechism/

As a young woman in high school, I volunteered in the local hospital as a "candy-striper", a name derived from the red-and-white striped pinafores worn as uniforms. Later in college, I majored in nursing, because I wanted to help others and also be assured of steady employment. I especially enjoyed working with children, because they're the most vulnerable members of society. So I began my career at Children’s Hospital of Los Angeles caring for chronically ill children. I soon realized the huge impact of emotional and mental health as well, and received my M.S. in Psychiatric Nursing and later, a PhD. in Psychology. By combining nursing and psychology, I’ve spent my life serving those less fortunate than me: the physically sick, the mentally ill, the recovering addict, the unwed mother, the lonely single, the abused child, the frazzled parent, the battered woman, the undocumented worker, and the homeless stranger.

I must confess here that I’m no Mother Teresa and certainly indulge my own vanity and material pleasures. I splurge on cosmetics, eat the chocolate, and buy the shoes. Life choices don’t have to be either/or; they can be both/and.
In 1985, I went with a medical team on a missionary trip to the Karen (pronounced Ka-rin) in Thailand. The Karen people are Thailand's largest minority group, who originally settled in Burma centuries ago, but became displaced while opposing Burmese military dictatorship. Suffering over 60 years of ongoing militaristic conflict, about 128,000 Karen now live in refugee camps on the Thailand-Burma border. Surrounded by explosive mines, they struggle to stay alive.

Before I went, I thought I would be helping such poor people, but in fact, their humble souls enriched me! Because Karen realize how vulnerable their lives are, they’re grateful each morning simply to be alive.

In fact, this outlook describes the essence of a Christian lifestyle from the beginnings of the Church. As the Apostle Paul put it:

We live close to death, but here we are, still alive. We have been beaten within an inch of our lives. Our hearts ache, but we always have joy. We are poor, but we give spiritual riches to others. We own nothing, and yet we have everything (2 Corinthians 6:9-10 NLT).

I suppose that’s why both the very young and the elderly also awaken at sunrise appreciating and therefore anticipating another new day. They too are dependent for survival.

Why do we forget that simple but foundational reality during the interim years of our lives? Perhaps, it's because our greater physical strength and material resources then allow us to fancy that we control our lives.

Since I visited the Karen, society has assumed and promoted even more independence with the invention of the Internet, cell phones, and GPS. However, the desperation of living in the jungle without electricity, running water, electronics, or knowing you'll survive each day, naturally drives you closer to God. Indeed, “His mercies are new every morning” when you're lucky blessed to be alive (Lamentations 3:23).


Meanwhile, as I approach retirement, I may not have great monetary wealth, but I can genuinely say that I've gained the wealth of personal fulfillment by having invested in caring for others. By showing mercy, I have encountered Mercy, Who Is God. In fact, I’ve learned a broader definition of mercy than the forgiveness of sin.

Mercy means being driven by empathy for another's need to act on their behalf; as God in Christ demonstrated by suffering upon Himself all our sinfulness and brokenness on the cross.
I write this blog to remind my own and succeeding generations that we are all fragile human beings—indeed, that we're completely dependent on God’s Mercy. That’s a fact and one that we dare not forget!

I emphasize that, because mercy is not as easily given as it is taken. As in Shakespeare’s classic play, The Merchant of Venice, our human nature commonly demands justice for others while begging mercy for ourselves. Here's the marvelous takeaway: confronting your own need for mercy and receiving it empowers you freely to extend mercy to others.


THE QUALITY OF MERCY IS NOT STRAINED

It droppeth as the gentle rain from heaven
Upon the place beneath. It is twice blest:
It blesseth him that gives and him that takes.
'Tis mightiest in the mightiest; it becomes
The thronèd monarch better than his crown.
His scepter shows the force of temporal power,
The attribute to awe and majesty
Wherein doth sit the dread and fear of kings;
But mercy is above this sceptered sway.
It is enthronèd in the hearts of kings;
It is an attribute to God Himself;
And earthly power doth then show likest God's
When mercy seasons justice. Therefore, Jew,
Though justice be thy plea, consider this:
That in the course of justice none of us
Should see salvation. We do pray for mercy,
And that same prayer doth teach us all to render
The deeds of mercy. I have spoke thus much
To mitigate the justice of thy plea,
Which, if thou follow, this strict court of Venice
Must needs give sentence 'gainst the merchant there.

-- Portia, in William Shakespeare, The Merchant of Venice, Act 4, Scene 1. 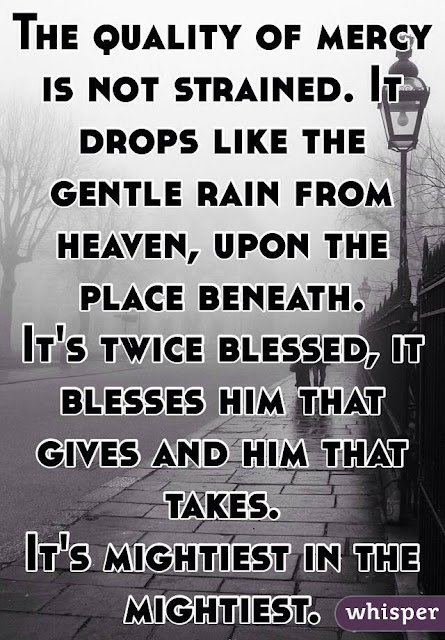 The Quality of Mercy Is Not Strained