Jesus asked his disciples, “When I sent you out that time without purse, bag, or shoes, did you lack anything?” “Not a thing,” they answered. “But now,” Jesus said, “whoever has a purse, or a bag must take it; and whoever does not have a sword must sell his coat and buy one. For I tell you that the scripture which says, ‘He shared the fate of criminals,’ must come true about me, because what was written about me is coming true.” The disciples said, “Look! Here are two swords, Lord!” “That’s enough!” he replied….

A crowd arrived, led by Judas, one of the twelve disciples. He came up to Jesus to kiss him. But Jesus said, “Judas, is it with a kiss that you betray the Son of Man?” When the disciples who were with Jesus saw what was going to happen, they asked, “Shall we use our swords, Lord?” And one of them struck the High Priest's slave and cut off his right ear. But Jesus said, “Enough of this!” He touched the man's ear and healed him. (Luke 22: 35-51)

After every mass shooting, a gun debate ensues. Predictably, Christians defend their right to bear arms and believe that Jesus literally told his apostles to carry swords by citing the first part of this chapter without following the text to the end. As we examine this sequence of events after the Last Supper and prior to the crucifixion, we understand that Jesus was foretelling his disciples to get ready for what was about to take place as a fulfillment of Isaiah's prophecy (53:12).

Jesus knew that a confrontation was imminent as they set out to the Mount of Olives during the Passover week.

Jesus prepared his men with instructions -- to sell their coats in order to buy swords. Citing from Isaiah 53:12, he predicted that he would be arrested as a transgressor. Since his apostles carried swords, that is, Jesus would be accused of inciting a criminal rebellion.

Peter misinterpreted his master’s instructions and later that night unleashed his sword and sliced off the ear of one of the mob who had come to arrest Jesus. Then to their confusion, Jesus rebuked Peter and told him to put his sword back in its sheath. Jesus then preceded to graft the servant’s ear back in place.

Jesus wasn’t depending on his disciples' physical prowess to protect him. In fact, his apostles had fallen asleep earlier while Jesus agonized in prayer beseeching God for mercy as he graphically envisioned his own suffering and death. In that prayer, Jesus could have easily asked for twelve armies of angels to defend him, but instead, Jesus begged for mercy. As Jesus cried out to the Father, “Not my will, but your will be done,” he received mercy for us all.

Jesus knew where real power comes from, and it's not from a sword. Therefore, Jesus told Peter to drop his weapon: “Put your sword away. Anyone who lives by fighting will die by fighting. Don’t you know that I could ask my Father, and right away he would send me more than twelve armies of angels? (Matthew 26:52-53).

But, wait! Didn’t Jesus just tell them to bring swords? Now, he’s telling them to put them away. Either Jesus is demented, or he must have meant something else besides showing up with steel weapons.

Before both sides of the gun debate pull out their swords here, let’s agree that this whole story is indeed puzzling, if not self-contradictory. It’s easy to see how Peter was confused; so are we! Why does Jesus tell them to bring swords earlier in the evening and then to put them away later?

The slave Malchus, whose ear Peter cut, offers a clue to understanding this puzzling text. Through that encounter, I believe Jesus was calling forth from his followers a power known only to those who know Jesus, namely, the power of mercy.

Imagine that graphic, even grisly scene at Gethsemane: As Jesus finishes praying and returns to awaken the apostles (who were supposed to be praying with him), an angry mob of religious men -- delegates from the chief priests, elders, and temple attendants -- assails Jesus in the Garden. In self-defense, Peter charges to kill the servant of the high priest with his sword; in dodging a lethal blow to his head, Malchus ends up losing his right ear. Falling in agony to the ground, he clasps his head in excruciating pain. At that moment, Jesus intervenes by mercifully restoring the ear back in place. Malchus (and everyone else) must have been in shock! What just happened? Who is this guy, Jesus?

This intense encounter between Peter, Marcus and Jesus is recaptured in Revelations 13:9-10: “He who has an ear, let him hear… He who kills with the sword will be killed with the sword.”


Malchus had his ear, and Peter had his sword, but Jesus had their attention!

Healing the ear of Malchus is the last miracle that Jesus performed before His Resurrection. We don’t know from the Scripture if Malchus became a follower of Jesus. However, the fact that his name was noted in the other gospels and remembered for centuries seems significant for a mere slave of the high priest. Indeed, for Jesus Malchus was more than a slave or an enemy; Malchus was beloved. Consequently, Jesus extended mercy to him.

We can bet that Malchus often retold that story with gusto about his ear being sliced off and miraculously healed, and that’s why we still know his name today.

As an eyewitness to the unfolding drama of Christ’s arrest and crucifixion, Malchus had a graphic story to tell as he experienced God’s sovereign mercy face to face!

In fact, that’s why God came to us in Jesus – to intervene in our sufferings and minister his mercy to us (John 14:35). By his mercy, we are no longer slaves to sin nor enemies of God. Rather, he calls us His beloved children and gives us all that we need (Galatians 4:7).

Throughout the book of Acts and the entire New Testament, the apostles and early Christians face persecution from other mobs and worldly authorities. However, we never again read about them using a sword to protect themselves. Although most of the Apostles were martyred, they displayed mercy for rather than might against their enemies.

At the same time, Paul and the earliest Jesus believers understood that we do face a battle in this world. He instructed the church at Ephesus to be strong in the Lord and to "put on the full armor of God" in preparation for the spiritual battle at hand.

Significantly, the only sword that Paul mentions in his letters is the sword of the Spirit which is the Word of God. (Ephesians 6:10-18).


We commonly refer to the Bible as the Word of God. In the gospel of John, the Word of God signifies Jesus Christ who exists within the Father. In Jesus, we witness the incarnation of Mercy as a human being, that is, the Word of God become flesh. More than a historical account, the Word of God is Jesus alive with us today in God's mercy that becomes flesh for us again and again, as we also receive and give mercy (John 1:1-18; 3:16; 14:7).

How then, could this God-who-is-mercy call His followers to bring a sword for the face off with centurions?

Here's how: Jesus was preparing them for the spiritual battle that they would soon encounter. It's as if he were saying, “When you were with me, you lacked nothing. Right? Then, trust Me, because I’ve got your back. Get ready! Get whatever purse, bag, shoes, you have, because that won’t matter. If you have the sword of my Spirit in you, you’re covered. But if you don’t have it, you better get it now even if you must sell the coat off your backs. The battle is about to begin just as you’ve read. Now is that time. This is the real deal!"

As followers of Jesus, we also need the full armor of God's mercy to fight the spiritual battle at hand. That's precisely what breaks through the gun debate, just like Jesus broke-up the fight at Gethsemane.

In healing Malchus, Jesus demonstrated that God’s mercy supersedes our trite “thoughts and prayers” to require action on our part. That's precisely the mercy we saw demonstrated after the mass shooting at Emanuel African American Methodist Church:

Just two days after nine people were killed inside Emanuel African Methodist Episcopal Church, mourning loved ones vocalized their mercy and compassion for the accused gunman, even before they had a chance to bury the dead. (NY Daily News, Nov. 3, 2016)  http://www.nydailynews.com/news/national/s-church-shooting-victims-families-forgive-dylann-roof-article-1.2855446

We also saw such mercy in the student activism at Marjory Stoneman Douglas High School after the Parkland shooting, even while still in their immediate post-traumatic shock.


Similarly, the grief-stricken parents of Newton mobilized in preventative action through the Sandy Hook Promise. https://www.sandyhookpromise.org/our_impact

Media reports often stir fear, and thereby cause us to seek self-protection. So we double-down on our Second Amendment rights and buy more guns.Such increasing reliance on guns for self-defense perpetuates a culture rampant with fear, mistrust, and hostility. Thus, we conjure up enemies and seek affinity within our own identity groups of race, religion, and politics. We also experience psychic numbing as the number of mass shooting and victims rise. Numbers become senseless abstractions rather than significant lives. We feel helpless, so we posture “thoughts and prayers” to cover our shame.

Scripture declares that "Jesus is at the right hand of God and is interceding for us" (Romans 8:34). What if we really did pray and ask Jesus how's He's interceding for us before God? I have no doubt that in such heartfelt grief and determination we would encounter Jesus weeping just as he did for Martha and Mary after the death of their brother, Lazarus. Jesus didn’t just feel pity for them, he did something: He raised their brother Lazarus from the dead to live again with them.

Granted we can’t always raise the dead, but we can safeguard against more deaths. That’s why we have seat-belts, helmets, life jackets, bridge railings, airport security, and numerous other safety precautions.

So why can’t we also have gun reform?

Too often our culture believes that guns offer saving power. Christians must begin to ask whether that qualifies as idolatry. Idols are counterfeits and substitutes for God when we feel powerless. The Israelites, for example, wanted the golden calf to replace Moses as a mediator of God's presence when they were lost in the desert. In that sense, an assault weapon may also communicate power when we feel powerless. Ironically, as our gun consumption increases, mass shootings increase; and as mass shootings increase, gun sales sky rocket.

The data underscores the false worship here: Guns are not saving us. They're just perpetuating the destruction. 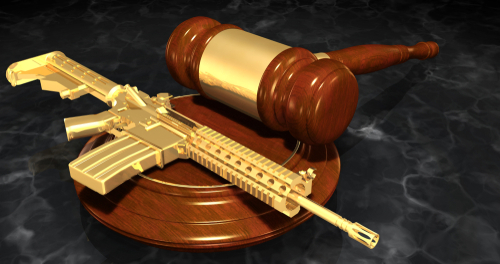 That’s why Jesus forewarned his disciples to carry not worldly weapons into his battles, but rather, the sword of His Spirit.

If we want to stop gun violence and mass shootings, therefore, we must first confess our idolatry to guns and actively demonstrate God’s mercy to protect us. Only as we join with Father God's heart for the world, for survivors, for school children, and potentially, for all of us, can we discern and carry out constructive action that reflects God's mercy for America.