Jerusalem, Jerusalem. Your people have killed the prophets and have stoned the messengers who were sent to you. I have often wanted to gather your people, as a hen gathers her chicks under her wings. But you wouldn't let me. (Matthew 23:37 / Luke 13:34 )


Before his death, Jesus saw the city of Jerusalem and wept over it, because it’s people hadn’t recognized that he had come as their Protector, their Comforter, their Prince of Peace! (Luke 19:41).  He lamented for Jerusalem as both the center of the nation and as the symbol of all God’s people at that time. With those passionate words, he preached his last sermon to his people.

Jesus repeated the city’s name twice emphasizing the intensity of his emotion, “Jerusalem, Jerusalem” just as he had previously spoken to "Martha, Martha" and “Simon, Simon.”

When Jesus visited Martha and Mary, Martha had been deceived by choosing work/ service over actual fellowship with him. Likewise, when Simon Peter boasted that he would never forsake his Lord, Jesus warned him that Satan would soon tempt him into denial. So, Jesus repeated their names.

Similarly, in the Old Testament, God entreats from heaven “Abraham, Abraham” as he prepared to sacrifice Isaac at the altar. David also grieved, “Absalom, Absalom” when heartbroken by the death of his son.


By repeating the city’s name, Jesus communicated both his care and his grief for Jerusalem for the last time, moaning: “Jerusalem, Jerusalem.”

Even today, I believe Jesus stands at the right hand of the Father God interceding with similar words of care, grief, and exhortation for his church among ourselves, (Romans 8:34) bemoaning: “America, America!”
The ancient prophet Elijah charged the people of Jerusalem: “You have killed the prophets and have stoned the messengers who were sent to you.” In Elijah’s time, untold messengers of the Lord were put to death by Jezebel in the time of Elijah. The prophet Isaiah was killed by being sawn in two; Uriah was struck down with a sword; Zechariah was stoned to death; John the Baptist was beheaded. All the apostles - except for John - were later martyred along with Stephen, who was stoned to death.

In the United States, Lincoln, John F. Kennedy, Robert Kennedy, and Martin Luther King were all assassinated. But, were they prophets?
The dictionary offers many definitions of a prophet by Merriam-Webster:


1) one who utters divinely inspired revelations; 2) the writer of one of the prophetic books of the Bible; 3) one regarded by a group of followers as the final authoritative revealer of God's will; 4) one gifted with more than ordinary spiritual and moral insight; 5) one who foretells future events; 6) an effective or leading spokesman for a cause, doctrine, or group.

My favorite definition of a prophet, however, is “one who feels the heart of the Father for his children”. That definition encompasses for me the full meaning of Jesus’ mission to reveal God’s character: “If you really know me, you will know my Father as well. From now on, you do know him and have seen him" (John 14:7 NIV).

And then Jesus declared that he wanted to “gather (us) as a hen gathers her chicks under her wings."

Yes, Jesus the Christ, who disclosed the heart of the Father, also compared himself to such a lowly image as a chicken! Something very instructive lies hidden in this surprisingly humble comparison.

“As a hen gathers her chicks under her wings.” 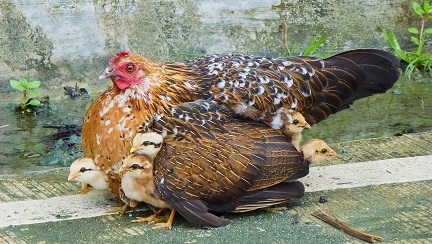 Why does a hen gather her chicks under her wings?

A hen broods over her eggs until they’re hatched, and then, delivers heat for her tender chicks until they’re fledged. Later, hens shelter their chicks from inclement weather and imminent danger.

A predator can easily pick off chicks scattered by themselves. When a hen senses such a threat, she makes a special clucking sound that her chicks recognize as a signal to nestle up close under her protective and embracing wings.

And so, Jesus taught us to pray for protection like this: “Our Father in heaven may your name be kept holy. May your kingdom come. May your will be done on earth as it is in heaven. Give us today the food we need and forgive us our sins as we have forgiven those who sin against us. And don’t let us yield to temptation but rescue us from the evil one” (Matthew 6: 9-13 NLT).

The Father heart of God forever longs to deliver us from all entrapments and grieves when we won’t let him. Without his protection, we are sitting ducks (or chicks) for the diabolic temptations set before us by the evil ruler(s) of this world.

Nevertheless, Jerusalem ignored Christ’s prophetic warning, and Roman invaders destroyed the city seventy years after his lament. How did that happen?

The same way we today turn away from Jesus’ warnings!

Even before the Romans attacked Jerusalem, the inhabitants were actively fighting one another. Jerusalem (like America) had become divided into different sectors by various political and religious factions attacking one another. Instead of uniting together under his wings, they were consumed instead by opposing each other. Jerusalem couldn’t throw-off the Roman yoke, because the people had diverted their focus from God.


AND NEITHER CAN WE!

We Christians need to learn the lessons of our past. When we fight against each other as the enemy instead of fighting together against our common, spiritual enemy, we can’t hear the hen clucking us to return to God.

At the very roots of our history as Christians, the Apostle Paul forewarned us clearly: “For we are not fighting against flesh-and-blood enemies, but against evil rulers and authorities of the unseen world, against mighty powers in this dark world, and against evil spirits in the heavenly places” (Ephesians 6:12 NLT).

Today, we may be facing the fall of the “American empire” as the United States is becoming more like the Divided States. Political parties too often obstruct each other eliminating dialogue and understanding, much less collaboration and negotiation.

Moreover, we often seek power rather than protection.

We lust for political, economic, and military power – fearfully stockpiling weapons, selfishly hoarding money, and rashly depleting our planet. Rather than relying upon the all-powerful Father, we depend on our political leaders to save us.

OH, AMERICA, AMERICA! Why have we turned away from the only one who can save us? 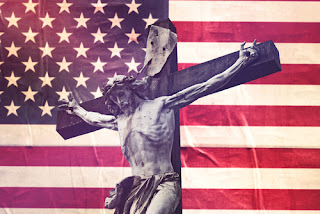 When faced with an unbearable situation with no means for escape, a child learns to "go away" in his or her head. Children typically use this defense mechanism against physical and emotional pain from adverse experiences. By dissociating from their thoughts, feelings and memories, childhood trauma becomes compartmentalized or separated-off in their mind. This usually happens when no parent or trusted adult is available to stop the hurt and comfort the child under distress. Thus, dissociation functions as a self-protective survival technique that allows children to endure "hopeless" circumstances. 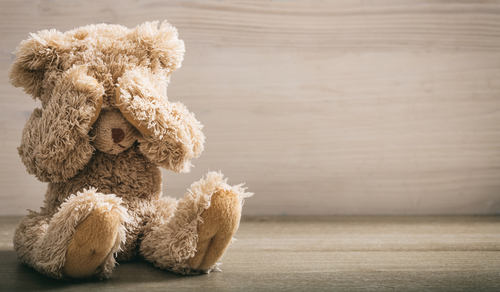 Compartmentalizing enables us to function normally at times, but it can also lead to serious dysfunction in our relationships at home, at work, and in society. Unresolved childhood adversities diminish our ability to deal with life’s stresses. We can either seek healing and develop resilience from adverse childhood experiences or suffer the ongoing biological and emotional consequences of letting them remain dormant.

Likewise, a nation needs to face its traumatic past and learn from its own mistakes. If a nation denies its historic guilt, it lives shadowed by shame and inevitably perpetuate its mistakes.

But what if you’re so cut-off, shut-down, and repressed that you don’t even recall your trauma? A key sign of this wound and its disconnect is whether or not you can empathize with a child’s pain.
Father God sent Jesus to give us as His children all we need that our earthly parents cannot provide. “Even if my father and mother abandon me, the Lord will take care of me” (Psalm 27:10).


That’s why Jesus wants to bear our burdens and calls to us: “Come to Me, all you who are weary and burdened, and I will give you rest” (Matthew 11:29). As He gathers us under His healing wings, He empowers us thereby to experience each other’s pain with compassion and comfort (see 2 Corinthians 1:3-5).

Thus, Jesus cries out even today for us as a nation: "America, America”!