I have a great neighbor who brings us fresh baked cookies when the holidays arrive, warm greetings when I’m gardening, and watchful home security when we travel. She’s the best!

I have other neighbors who probably don’t know that I live in their neighborhood and wouldn’t miss me if I moved away. Oh, well!

Then, there’s the anonymous neighbor who lets his dog relieve itself on my lawn and walks away empty handed. Urgh!

When voting season approaches, I canvass my neighborhood for miles and miles reaching out to all eligible voters in site. It’s a useful way to push me out of my introverted comfort zone as a neighbor, too. Bravo!

In California, back yards are walled or fenced-in. When I travel to the East coast, however, I’m struck by the expansiveness of yards that extend over one another seemingly without borders. How do they live without boundaries, I wonder? Maybe, they don’t need them as neighbors seem to know and look-out for each other there.

“The Wall” has become the symbol of our nationalist and isolationist mindset as we’ve become more determined to keep our southern neighbors off our grass. The current “zero tolerance” immigration policy has not only separated “us” from “them” but has also separated them from their very own family members.

Over the years, we have somehow gone from “Give me your tired, your poor, your huddled masses yearning to breathe free” to “Trespassers will be persecuted.”

At the same time, we demand religious liberty as some Christians seem to think that they’re the ones being persecuted. Maybe, we should remove the plank from our own eyes before we complain about that speck in our neighbor’s eye, so that we might see clearly again. (Matthew 7:3-5)

It’s always easier to judge others rather than to look at ourselves. Jesus knew that, so he told the story of the Good Samaritan, i.e. Good Neighbor.

In the Gospel of Luke, Jesus was asked by a lawyer what he must do to go to heaven. Jesus replied with a rhetorical question, “What is written in the Law?” The legal expert answered that all the laws in Deuteronomy could be summarized into just two: Love God and love your neighbor. Jesus confirmed that was the correct answer. However, the legalist wanted to further justify himself, and asked for more specific clarification: “And who is my neighbor?”

The parable that Jesus gave as an answer to that question provides a lesson on mercy for all of us to consider today.

A traveler gets mugged, beaten and left to die alongside the road. Two spiritual leaders - a priest and a Levite - pass by and ignore the victim. Finally, a Samaritan – one of a people despised by the Jews - passes by, feels compassion for the wounded man, and helps him.

Significantly, Jesus then asks the lawyer: “Who is the neighbor?” And the lawyer answers: “The one who showed him mercy.”


But he, desiring to justify himself, said to Jesus, “And who is my neighbor?” Jesus replied, “A man was going down from Jerusalem to Jericho, and he fell among robbers, who stripped him and beat him and departed, leaving him half dead. Now by chance a priest was going down that road, and when he saw him he passed by on the other side. So likewise, a Levite, when he came to the place and saw him, passed by on the other side. But a Samaritan, as he journeyed, came to where he was, and when he saw him, he had compassion. He went to him and bound up his wounds, pouring on oil and wine. Then he set him on his own animal and brought him to an inn and took care of him. And the next day he took out two denarii and gave them to the innkeeper, saying, ‘Take care of him, and whatever more you spend, I will repay you when I come back.’  "Which of these three, do you think, proved to be a neighbor to the man who fell among the robbers?”  He said, “The one who showed him mercy.” And Jesus said to him, “You go, and do likewise.”  (Luke 10:25-37 ESV).

Jesus knew that the theological lawyer wanted a concrete answer, so he could craft a loophole and escape the law’s judgment. Jesus pre-empts this tactic by not designating neighbor by either proximity or identity. Instead, Jesus’ parable demonstrates that mercy revealed the true neighbor then and even now, for us.

OK, I can relate to that! My neighbor is the one who brings me cookies. Right? Well that may be true in part, but Jesus is telling me here to go and give cookies, too. 😊

The real issue for us, therefore, is not who’s my neighbor, but whom am I being a neighbor to? Thus, Jesus tells the lawyer (and all of us) to “Go and do likewise.” Thus, Jesus calls us to be the one who gives mercy to others – to be a neighbor to everyone we pass and to bear one another’s burdens (Galatians 6:2).

By Jesus’ standard, we become neighbors by showing mercy to others, and thereby, love our neighbors as ourselves.

Such neighbors don’t discriminate by perceived differences. They don’t manufacture human boundaries with land, walls, religion, ethnicity, or nationality. Rather, authentic neighbors identify with other’s needs and respond with actions.

With his simple question, Jesus reveals the Father’s heart to the current national crises over immigration — that is, the desperation of separated children and parents amid the agonizing plight of refugees seeking asylum:

“And Who Is My Neighbor?” 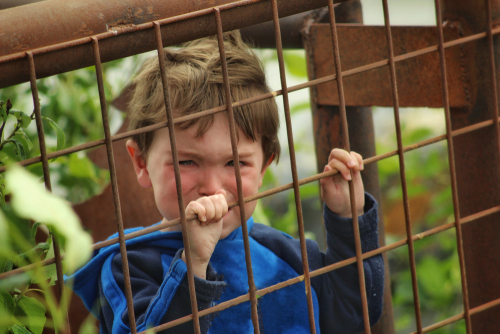 Let’s cut through the theological fabrications and political side-stepping: The biblical answer is YOU. You are the one called to be a neighbor, and thus, to feel mercy for the immigrant, the child, and the refugee (see Leviticus 19:33-34; James 1:27; Zechariah 7:9-10).

In fact, all of us who profess to serve Jesus are called to be a neighbor to the homeless, the sick, the prisoner, and the broken-hearted (Luke 4:16-21).

That’s the Good News, the Gospel, the Great Commission, the Message that we as Christ followers must share with everyone: We are their neighbors!

Let’s quit hiding from Jesus behind religious and political language. Instead of calling ourselves Evangelicals, Liberals, or whatever other label, let’s start calling ourselves “Neighbors” and acting like Jesus with mercy toward others.

For you were called to freedom, brothers. Only do not use your freedom as an opportunity for the flesh, but through love serve one another. For the whole law is fulfilled in one word: 'You shall love your neighbor as yourself' (Galatians 5: 13-14).

If you love each other, everyone will know that you are my disciples (John 13:35).